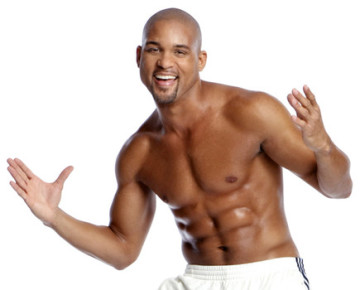 We all know who Shaun T is, right? In case you’re new to home fitness and you happened to have missed all of his commercials that frequent our televisions, he’s the creator of the world-renowned home workout program Insanity.
He’s the guy in the pic.

Vicky at Healthista recently attended Shaun T’s new product launch event, where he revealed the answers to a number of questions a lot of people would like to ask him:

What Shaun T Eats In A Typical Day

Shaun T enjoys a protein-rich scrambled egg dish for breakfast along with a generous helping of fruit.

“I normally start my day with six to eight egg whites scrambled with avocado and bacon. After my main breakfast I tend to opt for a side of berries which is a mix of strawberries, blueberries and raspberries. Followed by coffee. I always have a coffee early in the morning.”

Even Shaun T needs coffee in the morning!

For his next meal he looks for energy. He either consumes an energy drink or a sweet potato.

Many people don’t actually know the full benefit of sweet potatoes, it is not only fuel for your workout but it is also an anti-inflammatory.” 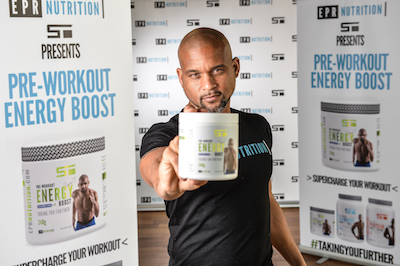 The next part is surprising: after his workout Shaun T will fast for the early part of the afternoon. Presumably to let the calorie-burning aftermath of the workout do its job, plus he says he likes to cook later in the day.

“I try not to eat too much during the middle of the day, except for drinking lots of water.

I like to cook later in the afternoon and evening. I’ll have either a steak with bacon, quinoa and spinach or asparagus, or a spaghetti squash.”

If, like me, you’ve never heard of a spaghetti squash, listen up. It’s a vegetable that resembles a regular squash, somewhat, but when you open it up it’s full of spaghetti, which you just scrape out.

“The best thing [about spaghetti squash] is that it’s only 35 calories per serving!” 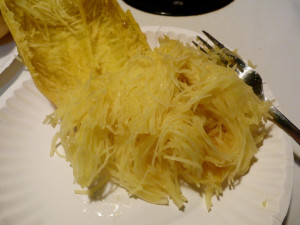 For his last meal of the day, Shaun T likes home-made cabbage tacos.

“I make my own home-made guacamole and mix it with tomato sauce and use cabbage for the wrap.”

As you can see, Shaun T does eat some unusual foods but, hey, if they taste good and it got him his shredded bod’ I’m definitely giving spaghetti squash and cabbage tacos a try!

What Shaun T Eats When He’s On The Move

We all know how eating at home is one thing, you can cook up anything you like whenever you feel like it, but eating on the move presents new challenges. You have to prepare your food in advance, which can be a bit of a chore in itself, and if you learn that you’re travelling at the last minute you might not even have the time to prepare your food. That means venturing out into a store or cafe, which can be a bit of a minefield if you’re not careful.

Shaun T admits he loves a chicken Caesar salad but avoids buying one because the dressing is too unhealthy.

“I still have my egg whites [for breakfast].

I opt for sushi for lunch.

Even more sweet potato for dinner!“

Shaun T strongly believes that everyone should be aiming to lead the best life they can and by focusing the mind their body will follow.

Shaun T acknowledges that everyone is different and what works for one person doesn’t necessarily work for someone else. He states that any sustained cardio activity that forces you to breathe heavily, to the point where you can’t talk, is going to get you results, but he believes that running is the single most effective exercise for fat loss.

“Running is the ultimate exercise. When your legs get tired, your core takes over, then your shoulders take over and when they get heavy your arms [take over].

By the end of the workout your entire body feels it.”

It may not have been the answer you wanted to hear but it’s true: running is great for fat loss! And many of us don’t like running, do we? Because it’s difficult, isn’t it? But if it was easy, then it wouldn’t be as effective. So if, like me, you dislike running then you need to take the bull by the horns – dig out those running shoes you bought three or four years ago and wore once and get running!

What Shaun T Recommends For Building A Great Booty

For “booty-building”, as he calls it, Shaun T recommends the almighty squat, ideally holding dumbbells. If that’s too easy, sink down into a deep squat position whilst holding dumbbells and hold that position then, for the ultimate burn, pulse very lightly up and down. 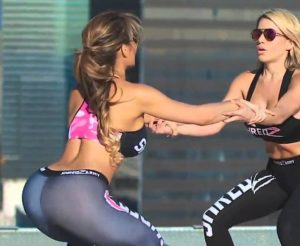